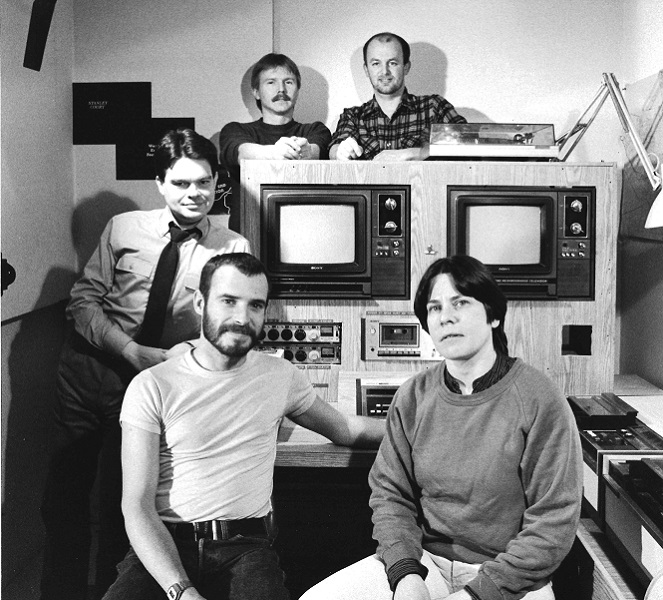 The concept of Gayblevision is universally accredited to Gregg Cutts (1953-1983). Cutts had moved from Halifax to Vancouver in the 1970s. In addition to his founding role in Gayblevision, he volunteered at the Coming Out Show on Coop Radio, the Vancouver Gay Community Centre (V.G.C.C.), and the Society for Political Action for Gay People (S.P.A.G.).

The minutes of a Satellite Video Exchange Society (VIVO) meeting dated January 30, 1980 records Cutts enquiring as to how best to record a S.P.A.G.-sponsored City of Vancouver all-candidates meeting that would be focusing on gay rights. SVES referred him to MM (Metro Media, a video access centre for alternative media production) and cable (Vancouver Cable 10).

In an interview with McEwen and Cutts rebroadcast in Gayblevision’s 6th ‘birthday’ episode (at 02:33), Cutts confirms he collaborated with Cable 10 to record that meeting and afterwards approached Cable 10 about a series for the gay community.

A meeting was called to gauge community interest. 22 men and 6 women attended. One of them was Mary Anne McEwen who had been invited by a friend. She became one of the three Gayblevision co-founders along with Cutts and Verne Powers.

McEwen (1946-2011) was the only original member with media experience. McEwen had been  educated at  University of British Columbia (1963-1967; completing her degree despite being expelled from her sorority in 1965 for being a lesbian). She later took film and video workshops at Simon Fraser University (1970-1972). She established her own commercial production company, Fast Forward Productions, in 1977.

Saskatchewan-born co-founder, Verne Powers (1947-1992), credited Gayblevision for giving him the courage to come out (West Ender 1980); the experience ‘literally’ changing his life. Powers worked on the first five episodes. He interviewed Tennessee Williams in one of Gayblevision’s most well-known episodes. Powers left Vancouver to pursue other interests in late 1980. He was working as a college instructor in Vancouver prior to his passing in 1992.

This group was joined by hardcore volunteers Barry Spillman, Don Larventz, Colleen French, and others, who would drive the first few seasons of Gayblevision.

The Incorporation of GBV-Gayblevision Society (1982)

The GBV-Gayblevision Society was incorporated as a non-profit Society in British Columbia in January 1982. Its first Directors were Colleen French, Gordon Armstrong, Wendy Tractenberg, Barry Spillman, and Don Durrell. It’s operation was focussed in the West End of Vancouver.  The purposes of the Society were:

b) to provide the gay community with an opportunity to communicate with other gay organizations around the world and exchange views and ideas through the visual media.

c) to promote an understnading of the gay lifestyle to both the gay community and the community at large.

e. to provide members of the gay community access to and training in video equipment mainly through the auspices of community television on a non-profit basis.

“The Gayblevision Society has decided to develop a new program; one without a label as an outlet for all alternative lifestyles. The 80’s will be challenging. Dare to be different. Set the Trends. Be Part of the Pacific Wave.”

Gayblevision was rebranded as Pacific Wave starting with its 19 December 1983 episode through December 1984. The BC provincial Social Credit government’ s neo-liberal policies were undermining Human Rights legislation and defunding gay, lesbian and feminist groups. In the wake of their actions an LGBT community still debating the pros and cons of coming out became more reticent to expose their sexual identity in public. The effect on Gayblevision was significant.

Don Durrell in a Body Politic interview talked about Vancouver gays “diving back into the closet at an alarming rate” and the lack of community volunteer support for the program, let alone appearing as subject.

Gayblevision struggled to continue as volunteers dwindled. The first generation of producers had moved on to other activities. A new one came in the revive the series and included Lloyd Nicholson, Ron Kearse, and Claude Hewitt. The show was reimagined and rebranded as Pacific Wave. The announcement was made on the November 7th, 1983 episode.  (Episode 41 at 20:30).

The show continued as Pacific Wave until December 1984, when the name was reverted to Gayblevision. The series continued another year. It was legally dissolved in July 1986.